I had planned to road-trip it to Lake Placid for two reasons: I wanted to see snow again (yes, I know, the Aussie was in search of this year’s hard-to-come-by snow…), and since The Harbin International Ice and Snow Sculpture Festival wasn’t in my immediate sights, I was looking forward to seeing those of the nearby Saranac Lake Winter Carnival.

A winter getaway to Lake Placid deserves more than the 24 hours I was able to dedicate to it, yet the break is well worth the drive. Blanketed in snow and with a thermostat reading of way below 32F/0C, the town delivers an abundance of sweeping vistas from the get-go. Located deep in the Adirondacks, along the edges of Mirror Lake and those of its namesake, and set against Whiteface Mountain – Lake Placid makes for a particularly picturesque village scene. Blue skies and birches, evergreens alongside bare deciduous trees, a warm sun splaying over a cute Main Street ~ the temps may not be as cold as those of previous years, though being able to participate safely and somewhat comfortably in outdoor activities is a bonus. 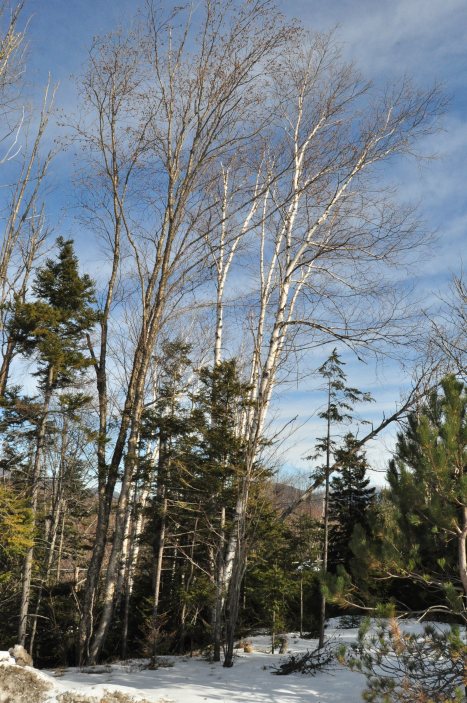 Though I had traveled with two things in mind, I came back to NYC feeling refreshed for completely different reasons: for breathing in the Olympic pride so honoured by the town; for appreciating the nature-inspired interiors so influenced by their surroundings; for taking pleasure in such simple activities as reclining in a hot spa, and warming up by a fireplace; for inhaling fresh mountain air; and, for meeting lovely people all along the way.

Here’s a blueprint to enjoying Lake Placid and its surrounds in a 24-hour period.

It’s a pretty straightforward drive from NYC to Lake Placid. Travel a few hours along an evergreen lined Interstate 87 and the icy-rock-faced High Peaks Scenic Route 73, and you’re pretty much there. Enjoy as a brilliant sun sets slowly behind tall Adirondack Mountain peaks. 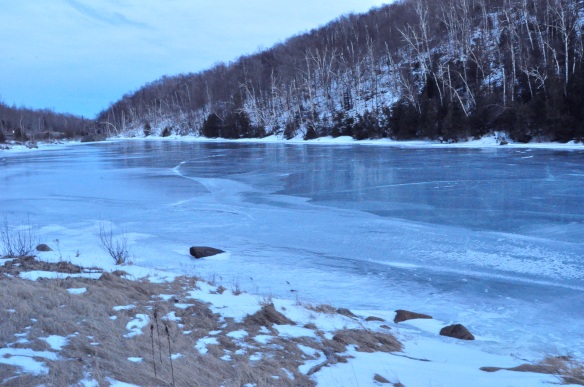 Be prepared to take a multitude of photos whilst checking-in at The Whiteface Lodge, located at the corner of Saranac Ave/NY-86W and Whiteface Inn Lane. Handcrafted antler chandeliers and cast iron pine cone light fixtures outfitted with rawhide lampshades illuminate the lobby, where a hefty George Jacques-built tabletop with a gnarled tree trunk base makes for a bold statement. Rustic-inspired floral arrangements add a touch of lightness.

The Whiteface Lodge was developed by Joe Barile, a former Olympic luger, and built in 2005. After three years of planning, the evidence is in the lodge’s details: from the wood paneled walls of its corridors, to the stairways’ log balustrades. The property employs a local artist, who is responsible for all the custom wooden accents throughout the Lodge. Dark leather couches and decorative Persian rugs exude an old-fashioned richness within the Adirondack-style lodge based on the Grand Camps of the wealthy in the 1800’s. 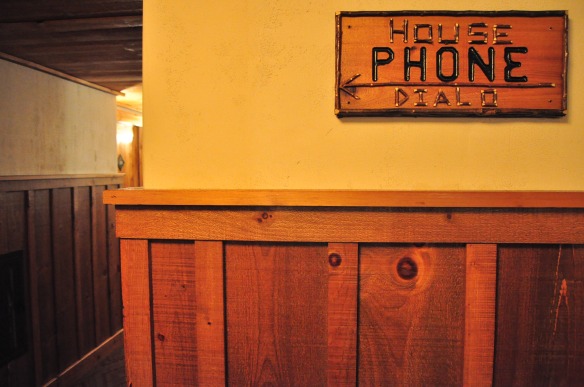 There’s no choice at The Whiteface Lodge but to stay in a suite ~ which means a jet spa bath as well as a room with a view. Here, huge chocolate chip cookies at the bedside are the new chocolate on the pillow.

Before the temps get to a barely tolerable freeze, drive a few minutes along NY State Route 86 in the direction of the village of Saranac Lake to view its winter festival; the Alien Invasion themed ice castle and sculptures were built by community volunteers and placed along the Lake Flower’s shoreline (Lower Saranac Lake is actually located a ½ mile west of the village).

The Saranac Lake Winter Carnival, Feb. 3-12, 2012 is the longest-running event of its kind in the eastern U.S. …the Carnival began as a one-day event to break the monotony of the long Adirondack winter and has grown into a 10-day festival that includes sports, dances, performances, two parades and two sets of spectacular fireworks above the world-famous Ice Palace.*

The festival has run for 115 years, and whilst previous years may have exhibited larger constructions (the warmer temps have not been kind this year), you’ll appreciate the effort behind such an installation. Lake harvested ice-bricked palatial walls and aliens carved out of frozen blocks are illuminated by neon lights in greens, blues, purples and reds. Allocate about thirty minutes here: any longer and your fingers may become beyond-numb, and your feet – somewhat of the frozen variety.

Fun fact: Beginning in 1936, Albert Einstein had a summer home in Saranac Lake that he rented from a local architect.**

Gooey marshmallow and melted chocolate sandwiched between two Graham crackers ~ need I say more? The Whiteface Lodge offers this Made-in-America treat every evening until 9:30 PM inside their Clubhouse Terrace. Though if you’d prefer to warm up with a pre-dinner aperitif of the alcoholic variety, head to the plush leather and wooded interiors of the Kanu Lounge.

Grand opulence. The hotel’s Kanu restaurant takes size to another dimension. Its expanse is defined by a high wood-beamed ceiling, accentuated with an enormous cast iron chandelier. The dining room is watched over by a number of mounted moose heads.

The Modern American menu follows the farm-to-table trend. Indulge. Order the crab cakes – two robust patties made of jumbo lump crab meat accompanied by mash; and the braised pork cheeks – so tender, served atop a bed of root vegetables. Don’t let the healthy course sizes deter you from dessert. Recommended finale: Crème Brulee accompanied by a glass of prosecco. 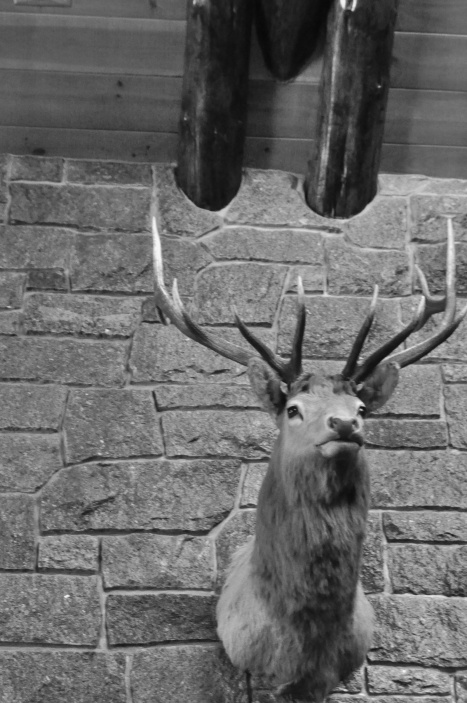 If you can fit it in – well, that’s up to you. The lounge is open until 11pm and the cocktails are good.

9am: Bright-eyed and bushy-tailed

That’s how you’ll feel when waking up to a snow covered view. You’ll be itching to get outside; to feel the crunch of snow underneath your boots. Fill up on a big breakfast – coffee, omelet & toast, granola – whilst gazing at the view of Whiteface Mountain. 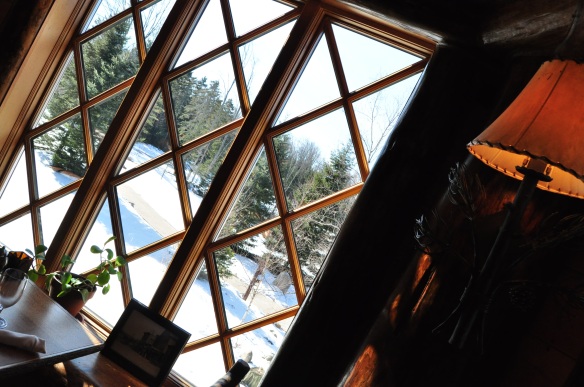 One of the best views of Whiteface Mountain is at the end of Whiteface Inn Lane, along the fringes of Lake Placid. At the end of the road (it’s a few minutes drive) you’ll come to the Lake Placid Inn. Descend the stairs to enjoy a panoramic view of the frozen lake and that snow capped mountain. Serene beauty – this is winter’s decadent offering. From this vantage point, images of Japan’s Mount Fuji come to mind. 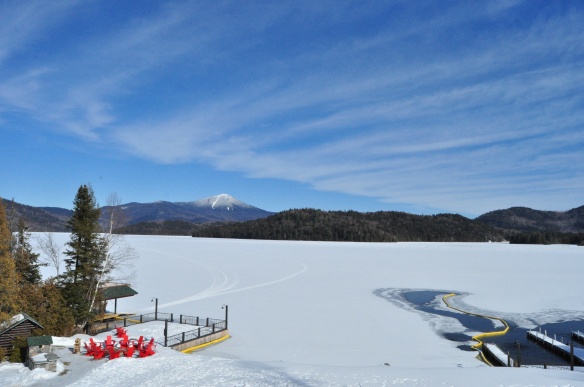 The town of Lake Placid is probably best known for its connections to the Winter Olympics; the town hosted the Games twice, in 1932 and 1980, and their legacy lives on. Many activities centre on those Olympic facilities, and make sure to take advantage of them. (Time may be a factor in having the ability to visit them all).

One of the coolest spots to experience pure adrenalin is atop the 26-storey, 120 foot high ski jump at The Olympic Jumping Complex. Located about 15 minutes from the centre of the town, prepare to be exasperated by the sheer velocity of it all. A chair lift ride and elevator ascent later, you’ll be standing on an open air viewing platform looking down the steepest incline ever…  A fear of heights gives way to shock & awe as you put yourself in the skis of those brave athletes; this is the site of their launch before veering off into the air, spanning the length of a football field! You’ll be able to take some overhead shots of the town and Adirondack Mountains from here. 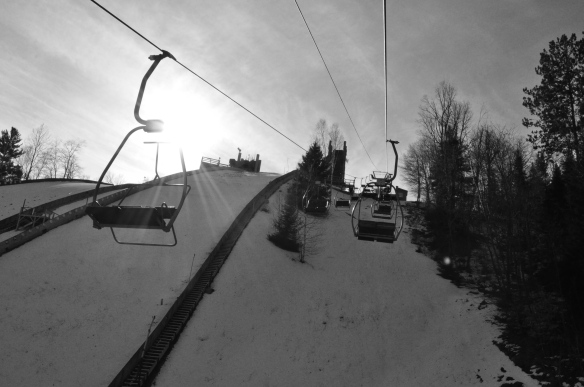 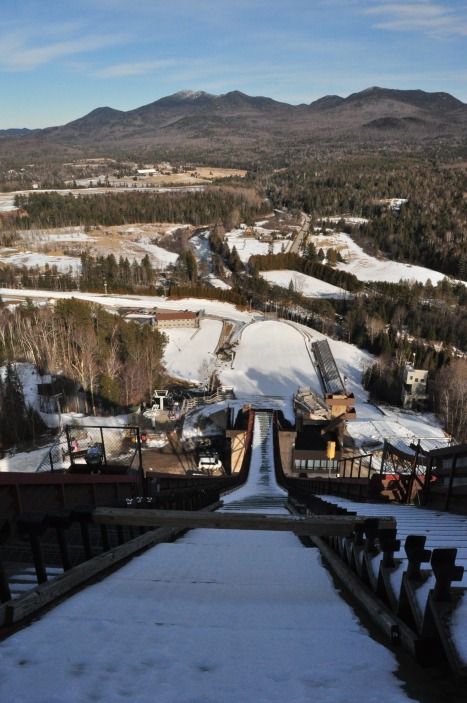 Head back to the center’s Main Street, lined with boutiques, a cinema, library and mom ‘n’ pop shops. No fear, there’s a GAP outlet too. After you’ve dropped into the resident Starbucks or local café for a large hot chocolate and sweet snack, stroll to the water’s edge and watch life as it happens along a frozen Mirror Lake, noticing dog walkers and sledders. There are some great vantage points from which to take photographs, as noted to me by the passers-by, who were only happy to show their top spots.

NB: it’s all paid street parking here though spots are not hard to come by.

Apparently a good spot from which to take a photo

A few minutes walk away from the retail strip is the Olympic Center. This is where the triumphant hockey game of 1980 happened between the less seasoned US team and their mighty Soviet rivals; Team USA went on to win gold, against Finland. The USA-USSR game went down as one of the finest in American sports history; it was a stunning win for the country and an inspiration for sport-enthusiasts all over. The movie Miracle, starring Kurt Russell, was released in 2004 to further cement this moment. These days, the indoor rink is grazed and razored by the US/CAN hockey teams, and pirouetted over during figure skating championships. Sit and enjoy the ambience… don’t mind its sweaty locker room smell. It’s part of the charm.

The Olympic Museum is a large room filled floor to ceiling with any association to the Winter Olympics of 1932 and 1980. Vintage posters; old New Yorker covers; team jerseys; newspaper cutouts; a wall outfitted with Olympic torches from every Winter hosting city; medals of various sizes, proportions and metal colours. History was made in this town and continues on within these walls, where the front desk staff is only too happy to chat even further.

Surprisingly, you may find that the road home is slightly quicker than the drive in. There’s less gawking when it is pitch black outside, though you’ll be too exhausted and rested from the fresh air to even care.

(Read: I wasn’t the driver on this trip.) 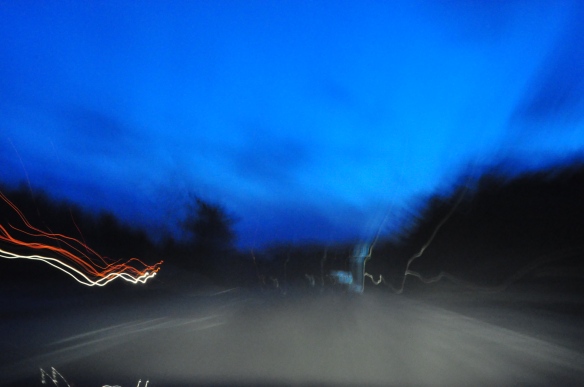 OPTION: feel free to substitute all of the above afternoon activities with a long relaxing soak in the hotel’s hot tub. 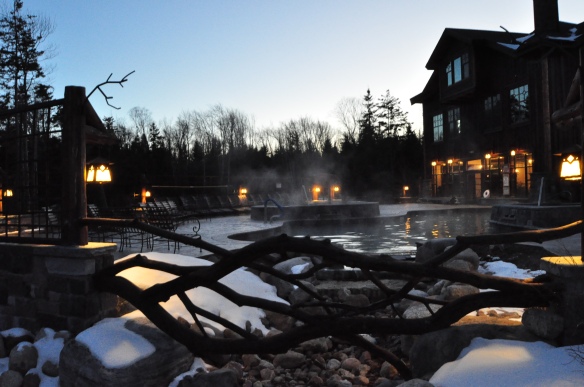 In my preliminary research on Lake Placid, I came across this piece of information:

In 2010, U.S. News & World Report rated Lake Placid as one of the “6 Forgotten Vacation Spots” in North America.**

What are you waiting for – get out to Lake Placid and create some memories! Meanwhile, I’m planning to report on it again in spring/summer!

If driving isn’t an option, Amtrak stops at Westport Depot – located approx. 40 minutes from the centre of Lake Placid. You may arrange for shuttle transportation if the hotel doesn’t provide it.