Lazy Sunday morning; in bed, watching music videos on my Archos G9 tablet (not an Ipad). One of the most oft-repeated songs on my playlist is the Café Del Mar N O W Remix of Letting the Cables Sleep by BUSH, though today I happened upon the music video for the original version of the song and found myself rewinding & relistening… Was the band’s lead singer, Gavin Rossdale, walking down one of the railroad-tracked cobblestoned streets of DUMBO? Was that the Manhattan Bridge, at the end of one of the neighbourhood’s streets, about 15 seconds into the clip? I couldn’t confirm it while trying to research the video’s filming location on the Net (I did learn that Joel Schumacher directed the video) but it didn’t matter. It was enough to inspire me (and my husband, after some coaxing) to drive to DUMBO for an early afternoon coffee… and to take some photos of the ‘hood… again.

Manhattan Bridge in the background

We’ve had coffee at the Brooklyn Roasting Company a number of times, and I’ve taken photos of DUMBO many a time too; I just never tire of doing either. Give me any excuse, and I am there ~ I can wholeheartedly say that I love visiting DUMBO. If it suited my budget, we would have moved here after relocating from the West Coast. And yet, judging by the recent real estate valuations, this just isn’t going to happen anytime soon either. This is the third most expensive neighbourhood in New York; a place where it’s pricier to look at Manhattan than to live in Manhattan. 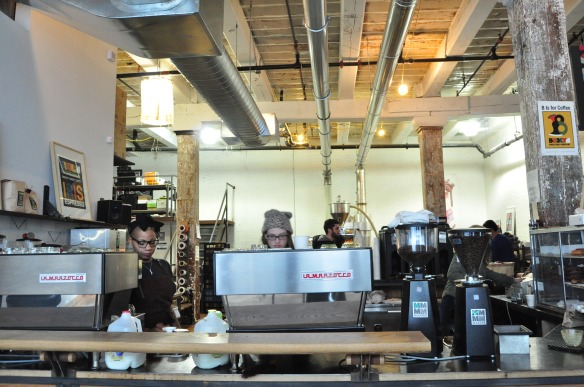 Mopeds are the new bicycle...

DUMBO stands for Down Under the Manhattan Bridge Overpass.

Every time I come here, I think of the scene in Bladerunner, when Harrison Ford’s character is having noodles in Chinatown. Now, many people may think otherwise – my husband-the-movie-aficionado included – but for me, the streets here conjure up the same feelings as those when I watch that part of the movie: mystery, darkness, cutting edge. Alot of DUMBO’s life happens under the Manhattan Bridge – it casts a shadow over the neighbourhood’s streets; the sound of the subway that rambles along it can be heard periodically overhead. 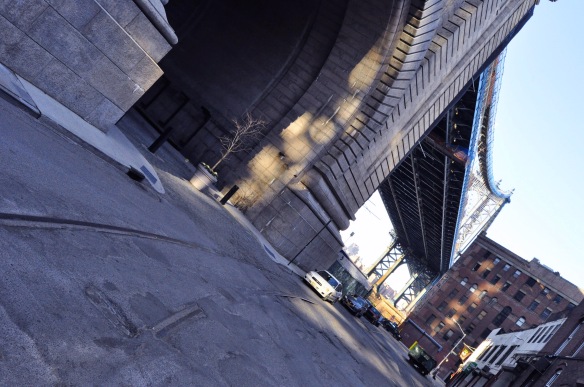 Life under the Bridge

In the late 1800’s, it was primarily a manufacturing district, housing warehouses and factories including Arbuckle Brothers (coffee and sugar), J.W. Masury & Son (paint), Robert Gair (paper boxes), E.W. Bliss (machinery) and Brillo (soap pads). With deindustrialization, it began becoming primarily residential, when artists and other young homesteaders seeking relatively large and inexpensive loft apartment spaces for studios and homes began moving there in the late 1970s.The acronym Dumbo arose in 1978, when new residents coined it in the belief such an unattractive name would help deter developers.*

The developers do not seem deterred at all.

Residences, businesses and a Con Edison power plant exist, side by side

The vista from the westernmost part of DUMBO, along the East River, is of downtown Manhattan; the neighbourhood is flanked by the Manhattan and Brooklyn Bridges, yet not overrun with yuppies and fleeing Manhattanites, who still seem to be headed in the direction of Williamsburg – a place I also love (it’s where I Iive) though one that is busting with people, especially around Sunday brunch. 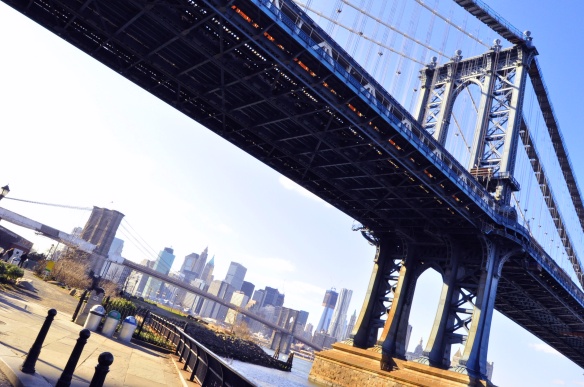 Located between the Manhattan and Brooklyn Bridges at Empire-Fulton Ferry Park, the carousel is a ‘new’ piece of history in the industrial neighbourhood (cannot be seen in image above) ~ it was opened in September 2011 and costs $2 per ride.

The carousel was built in 1922 by the Philadelphia Toboggan Company, based in Hatfield Pennsylvania. It was used in Idora Park, a private amusement park in Youngston, Ohio, until the early 1980s. In 1984, Walentas, a New Jersey native, traveled to Ohio to save the carousel from being taken apart and sold off in pieces.

Todd Goings, who specializes in carousel restorations, put the carousel back together for its opening. It is a three-row machine with 48 horses and two chariots.

Two Trees Management Company, LLC, a company her husband David Walentas founded, constructed the building in which the carousel is now housed on Water and Old Dock streets in DUMBO. The construction of the building cost $8 million.

The Walentases commissioned Pritzker Prize-winning architect, Jean Nouvel, to design the building, which is essentially an encasement that allows the carousel to operate year-round. The 72×72-foot acrylic building provides framed views of the nearby bridges as well as the Manhattan skyline.** 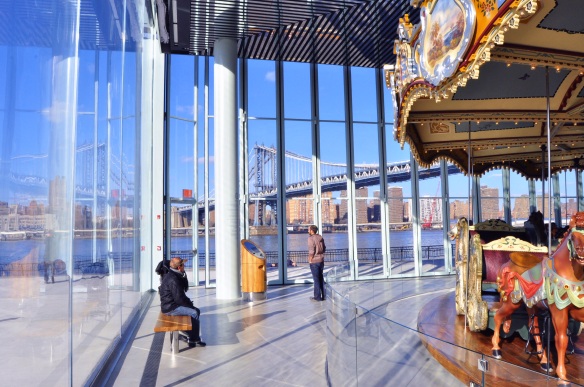 DUMBO also has a thriving arts community ~ street art is intermittent yet frequently visible; a few galleries can be found here; and, St Ann’s Warehouse, a respected theatre, is located on Water Street.

Since 1980, [St. Ann’s Warehouse] has been putting on cutting-edge music, dance and puppetry productions…[Their] signature programming is just as enticing as ever… (Time Out)

Brooklyn Bridge, seen through a window of The Tobacco Warehouse.

It’s hard to miss this now-roofless, 25,000 square foot warehouse, which is situated directly under the Brooklyn Bridge Overpass in close proximity to Jane’s Carousel. It was constructed in the 1870s as a tobacco customs inspection center, saved from demolition in 1998 and, repaired and stabilized by The New York State Office of Parks, Recreation & Historic Preservation in 2002. 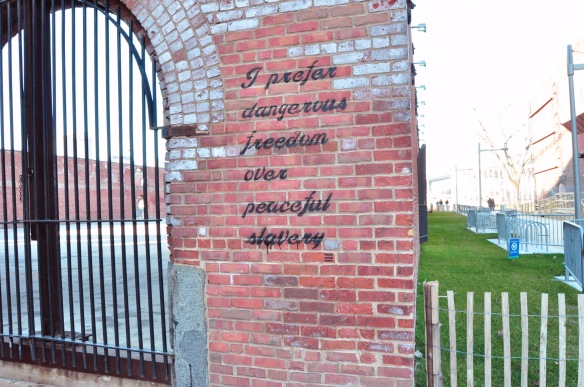 The streets may seem deserted in parts, and many of the buildings devoid of any activity, yet the cafes, bookstores, retailers (yes, Bang&Olufsen and West Elm have set up shop here) and the parks are full of life. Maybe that’s what I like so much about it – you can be alone, yet the neighbourhood isn’t a lonely one. And now that it has been decided to repurpose the Con Edison power plant along the East River, Gavin Rossdale will be right on the money with Letting the Cables Sleep.